Shop Handmade for the Holidays

This holiday season I encourage you to support small businesses and buy handmade whenever you can!

I am offering free shipping in my etsy store until Monday evening. Mommysew I love making custom orders, so please do not hesitate to contact me!

Some of my other favorite etsy sellers are:
Pegged (Seriously how cute are some of these dolls?)
Loopsies (I have dreams of a quilt or something with all of these embroideries)
Hip to Piece Squares
Wee Little Stitches
Sarah Jane Studios
YarnMiracle
Kaya's Kloset (I have several pairs of her shoes for my kiddos)
LucyJane Studios (I LOVE this bag!) 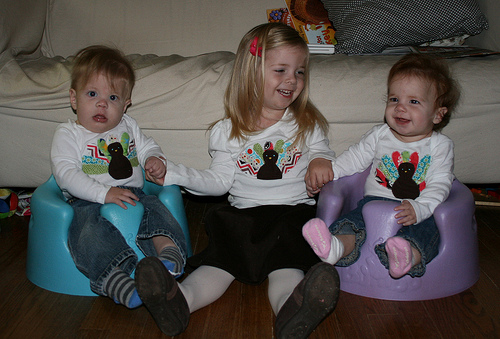 From our three little turkeys!

Many many moons ago counted cross-stitch was my craft. I made many items for myself and my family. We have cross-stitched ornaments, framed pictures, bookmarks, etc. I love the preciseness of cross-stitch. The way each x has a certain color, a certain place. It it very meditative for me. And super easy, assuming you can count! I'll try to dig up some older things to photograph sometime, but today I have three mini stitches to share. 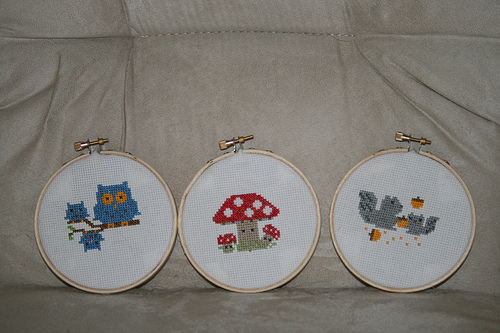 I used this awesome pattern to make a decoration for the babies' room. (I have a woodland animal theme - I'll share more pictures soon!). They were little, cute, quick and very satisfying. I actually made the owl twice - once for us and once for my niece's new room.

I'm very tempted to make her tesselations pattern for my math loving husband sometime, but I do have some cross-stitch birth announcements to finish for my kiddos first.

For Samantha's gift this year I wanted to make something that went along with the farm theme. I'm not sure how I found these through my googling, but they turned out to be exactly what I wanted! 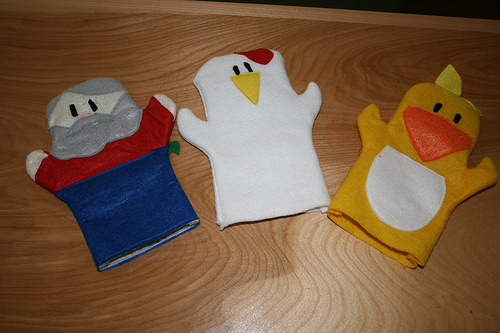 I used a tutorial from here. It was great! A good bit of cutting and organizing all the pieces, but well worth it. I printed each page, and cut out all the pieces. Then I got 10 ziplocs, and divided the pieces for each animal into them. I also used one ziploc for pieces shared by more than one animal. 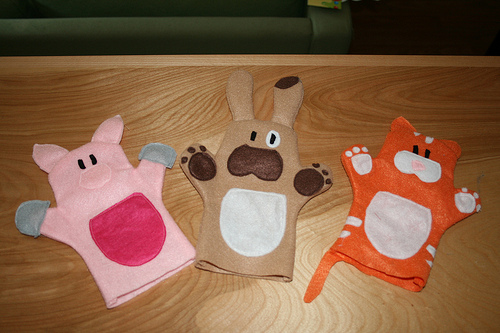 Then I gathered my felt, and got busy pinning and cutting. I put all the pieces back into their baggie as I cut them out. When I was ready to sew I gathered all the pieces that would need to be sewn with a particular color thread, and sewed them on. Then I went to the next color. This helped me to not have to change my thread and bobbin a million times. 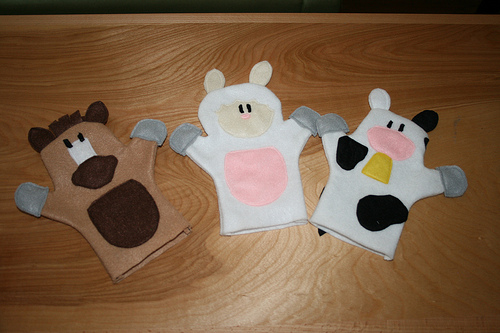 They were really easy to assemble with my baggie method. And I think they turned out pretty cute. Samantha doesn't seem very into them right now, but she usually picks things up weeks later and they become her new favorite thing, so my fingers are crossed!

Way back in September Samantha turned three. Now, most of you who know me know I love a good theme. I decided that we would do a farm theme for her birthday this year. She LOVES animals, so i knew she would approve. 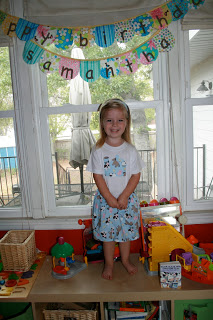 Birthday Girl
I started with her outfit. I had purchased some adorable fabric with cows, horses, sheep, etc. on it at JoAnn's. I made a simple skirt, and appliqued a barn shape onto her shirt. Her headband matches as well.
For the invitations I used a diecut shape of a barn I had purchased many many years ago to use in a scrapbook (oh yeah, I used to do that too). If you can't find a die cut you could print out a barn shape.  I traced around it onto red cardstock and cut them out. I made doors that opened and glued the invitation details into the opening. I don't have a picture of this, but it's pretty self explanatory. 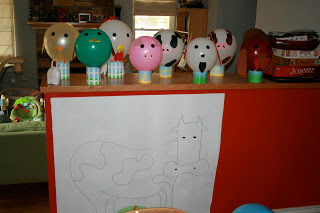 Several years ago I found some Martha Stewart Craft Kits at Big Lots for $2.99. I put them away for when Samantha was older. A few days before the party I remembered them, and thought some were for farm animals. Sure enough. These balloon animals were one of the kits. We had a good time putting them together and playing with them after the party.
We also played pin the tail on the cow (cow drawing by hubby), which some kids enjoyed and some did not (they didn't want to be blindfolded). 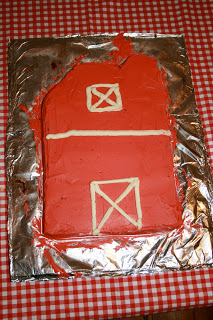 Hubby made a barn cake. 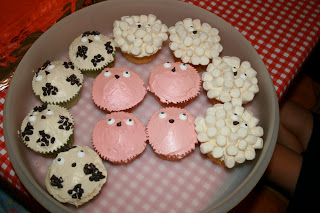 And farm animal cupcakes (cow, pig, sheep).
We served pigs in a blanket, 'hay' (potato sticks), watermelon, beans, and potato salad. The kids got to drink milk out of bottles. 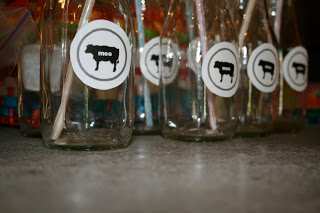 (Idea and sticker image from here). 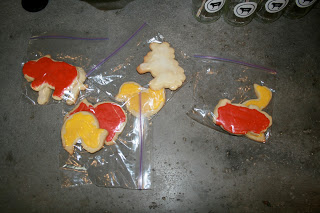 We made farm animal cookies for favors (why my husband took this picture when the cookies were already in the baggies is beyond me). We had cows, sheep, ducks, horses and pigs.
We gave the kids crayon rolls (more on them later) and farm animal coloring books I made by printing coloring pages of different farm animals and copying them and making them into little books.
For a craft, I printed a large barn image and cut it out of red cardstock. I found farm animal foam stickers at Michaels and the kids made their own barns to take home (alas, no picture of this either!). They were really cute.
And that's it! More on what I made Samantha for her birthday this year to come!
Now to start planning next year's party.....

I mean to spend more time with you. I really do. I want to have a conversation with the outside world that doesn't always consist of me describing the day's dirty diapers, or non-napping children, or the mud the dogs dragged in, or my perpetually full-of-dirty-dishes sink. Bless his heart, my husband doesn't so much care about how the knitting is going, or how the tension problems I have with my sewing machine make me want to chuck it across the room. (He is sympathetic to my problem of my missing quilt squares though. 30 of them! Where did they go? I know they were in the sewing room the last time I saw them. I have torn the room apart. I can't find them. I did, however, find hubby's anniversary socks - the two pathetic ones that got finished - which I had lost on our actual anniversary - another story I haven't told you.)
I'm having a difficult time with balance these days. I'm trying to do to much (as always). I want to make one million christmas gifts. I want to make things for my etsy store (but it would be nice if things would sell), I want to play with my kids. I want to have a clean house. I want an hour to go to the store by myself without feeling like I am neglecting my kids and not spending time with my husband. I want to sit down and read a book without feeling guilty for the things I am not doing. I have a hard time sitting still. But I have an even harder time 'doing it all.' I keep feeling like I should have all this extra time to do things since I am staying home from work this year, but somehow the days go even faster, and I get less done. How did I do it when I worked full time (I did have two less children then)?
Forgive my abandonment of the blogging month thing. I felt like I was just writing to do it, to check something off my list. And that's not how I want to approach the blog. I do have a huge list of things I want to talk about. But I really want the time to write an actual post, not just throw some pictures up and call it done.
OK. My children are napping at the same time (alert the media!) and this is sure to not last long. Perhaps I can go to the bathroom alone? What luxury.....

I never had any good burp cloths when Samantha was born. I used some of the Gerber birdseye cloths, but they were not very absorbent, and I never really liked them. Sometime after she was past the point of needing burp cloths, I saw something on the internet where someone had taken fabric and sewn it to a cloth diaper. Genius! I really enjoy making these for baby gifts -they are quick and super cute. I used a ton of burp cloths on a daily basis with the twins for all sorts of things, and it was nice to have plenty on hand. I'm sure there are tons of tutorials out there, but I'll quickly share how I made mine. 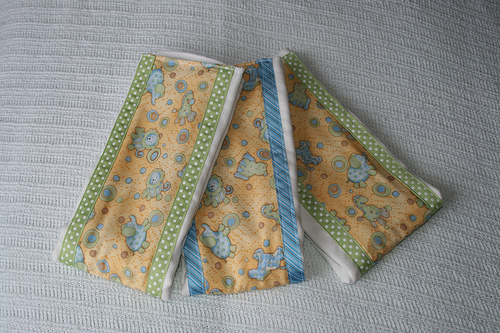 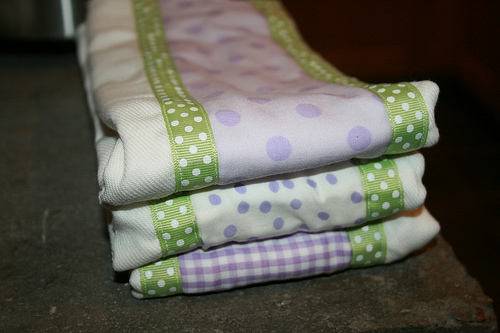 Prewash diapers and fabric. The diapers shrink a bit with washing. 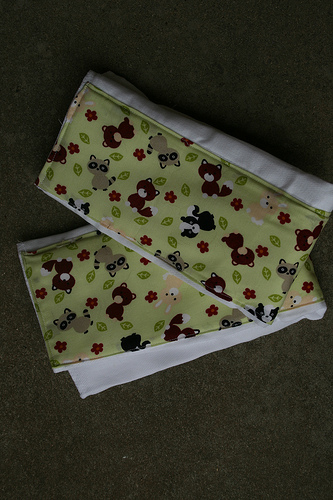 Cut as many strips of fabric as desired (one for each diaper/burp cloth). I cut mine to 5" x 18". Press and iron fabric over 1/4" on the long sides. Sew one long side of fabric just to the outside of the center panel of the diaper. Tuck the end of the fabric under and sew down. Repeat on the other two sides. If you would like to add ribbon, cut ribbon to the length of the long side of the diaper and sew down overlapping the edge of the fabric. Voila! 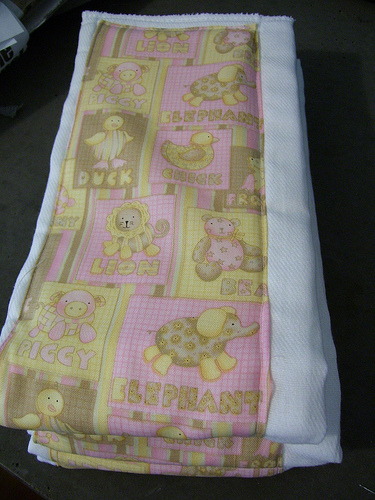 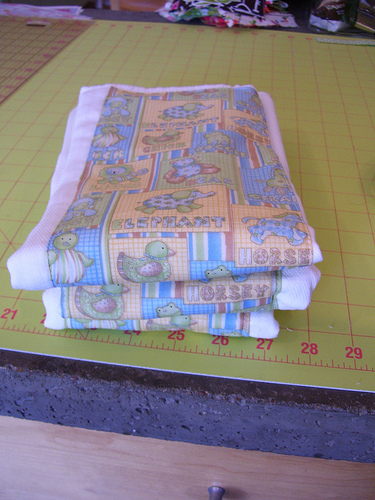 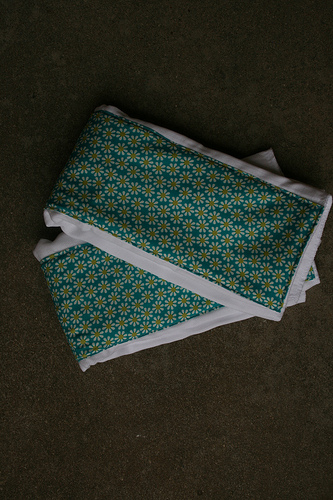 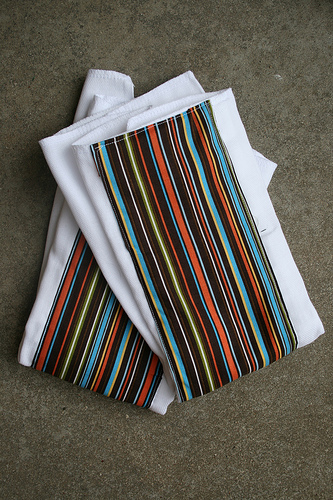 My hand is still really bothering me, and typing hurts, so a quickie tonight. Way back in 2009 I embroidered dish towels for my brother and sister-in-law. At the time she was a vegetarian and he wasn't. I thought I was so clever with my his and her dish cloths. But now they are both vegetarians, so who knows what happened to the meat towel? :) 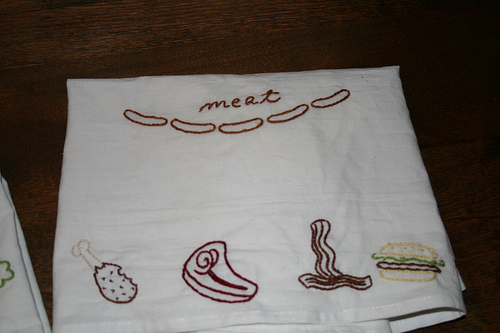 A few years ago my sister saw an old knitted Purdue hat on ebay. She asked if I could recreate it for her and her husband (both Purdue alumni). I figured it couldn't be too hard, so I 'created' a pattern based on the photo of the hat (and I deleted the email with the picture a long time ago - sorry).

I made a chart of the letters on graph paper, and got started knitting. Emily specifically requested huge pompons. 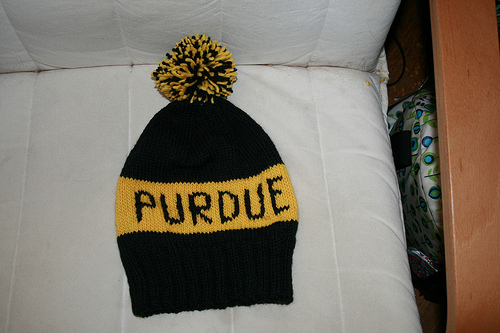 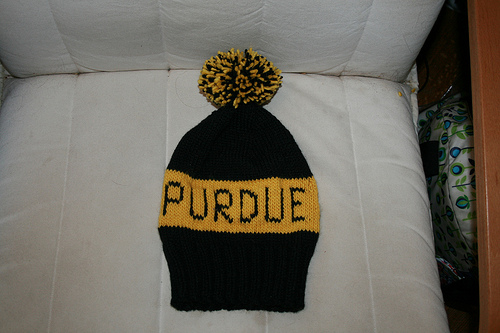 Then a little baby came along and needed his own Purdue hat. This one did not go as well. I had kept the chart, so that wasn't an issue. The problem was with my pregnancy brain (although I didn't know I was pregnant yet, just thought I had a big case of the stupids). I started out fine, and about half-way through the chart, realized that I was knitting the letters upside down (I had forgotten to flip the chart). So I ripped and restarted. But a few rows in I realized that instead of flipping the chart I had decided to knit it backward (What???). Ripped again. Third time was the charm. 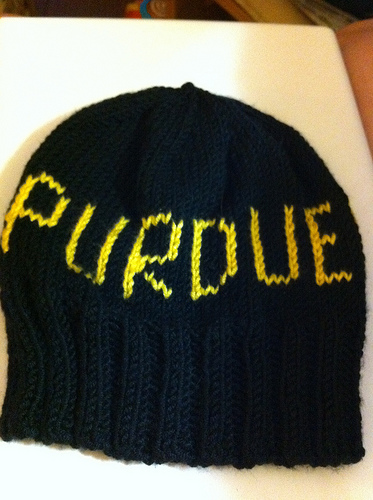 His looks a bit different as I wasn't sure I had enough of the yellow to make the band yellow.

Without the pregnancy brain this was an easy project!

Yeah, so November is apparently a 'host' to lots of themed months. NaNoWriMo (write a novel in a month), NaKniSweMo (knit a sweater in a month), Movember (grow a 'stache to support prostate cancer awareness), and NaBloPoMo (post to your blog every day, all month). I'm not up for a novel, have too many sweaters to finish to start a new one, and don't think my hubby would like it if I grew a 'stache. So blog posting it is. I need to kick myself back into this, so I'm going to do my darndest to keep up! I have a ton of things to blog about. Now if my children will nap so I can write blog posts.... :)