This post has no coherency, and I can't think of a good title.

I'm starting to think that the universe is conspiring against me posting regularly. It seems  that as soon as I sit down to write, my kids need something/wake up from their nap. And when I do actually write a post, blogger won't upload the pictures for it! Gah! So here goes nothing - I'll write this and we'll see if the pictures will load. If not, it will join the recent pictureless posts, and feel right at home! :)
I am trying to post some of the fairly large backlog of finished items and general excitement, but since those posts are saved in draft without pictures, let's talk about the kids, eh?

Samantha just turned three, which seems impossible. She started school for the first time this year and loves it, though cried when I left her today, for the first time. Three has been a slightly less than delightful age so far - some attitude and general grunting and sighing when she doesn't get her way. And then there's the crybaby days, when she cries if I can't get something for her the second she asks, or the puzzle piece doesn't fit the first way she tries it. I'm hoping this is a quick phase!

The babies were five months old yesterday. I cannot believe how fast it is going. The speed seems multiplied because there are two of them, and because I have older siblings to deal with. It's hard when I feel like I barely get to spend any time with both of them, and they almost never get mom to themselves, unless they are nursing. But they are big, and adorable and giggle and roll over, and try to get toys, and are so much fun at this age. I would like them to stay about this age for a while as I am not looking forward to getting even less done as they become mobile and must be contained/chased all over the house. 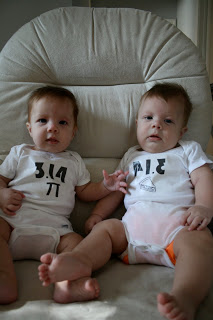 B&E; at three months old.
I doesn't seem like fall will ever come here in Texas. I'm longing to wear jeans every day, and sleep with the windows open, and play outside without sweating. But, even thought it was 100 yesterday, I am planning some fall wardrobe items for the kiddos. Skirts for the girls, and pants for Ben. I'm also planning to embroider some onesies/shirts for everyone too.

I'm also crazily knitting socks for my husband. Our 7th anniversary is rapidly approaching (in 10 days), and since the traditional 7th anniversary gift is wool, well, you can see where the socks come in. I planned 7 pairs of socks, and I didn't let myself start until after our 6th anniversary (for some reason that felt like cheating). And then about 3 weeks later we found out we were having twins, and my knitting output sharply declined. Add in all the Christmas/birthday/baby gifts for others in our family, and then all the baby knitting and sewing/quilting for our babies, and then the actual arrival and care of our babies, and, well, I'm not going to make it. I still hope to have one of each pair of socks done, but that means that I have to knit two whole and two half socks to make the deadline. Ha.

One thing this sock project has done was to remind me of how much I enjoy knitting simple socks. Round and round, no thought until you need to measure every so often. They are perfect for knitting while playing games with toddlers, sitting outside after school while the children burn off energy, watching playoff baseball, even in the movies, when you get to have that one date with your honey (thanks mom!). I think I'll be able to complete his pairs throughout the winter as we slow down and spend more time relaxing as a family. Three cute kiddos
I also have several baby sweaters that are in various stages of completion, and if it ever cools off, my children will need them, as we don't have much use for heavy winter coats down here, but a wool sweater is mighty handy. I've barely started Samantha's and since it's the biggest, I best get moving. I've also got sweaters on the needles for my niece and nephew, and since they live in Colorado where it will be cold soon, I need to get those finished. But nothing gets worked on until I get as much done on those socks as I can by next Sunday. Speaking of those socks, I should go work on them for a few minutes until it is school pickup time, since the littles are napping.

It's been awhile. I have tons of excuses for not blogging, but it really comes down my lack of motivation. With ravelry and flickr, I found myself just posting there, so I still had my visual record of finished items. However, I was bad about remembering when I had started, if I had frogged/swatched, etc. That was the upside to the blog.
And I started sewing again, and felt unsure as to whether or not that had a place on my 'knitting' blog.
And work was crazy.
And I had a toddler.
And, and, and....
And then I got pregnant again. And, surprise, surprise, it was a little more than we had bargained for.....two babies!!! And I was exhausted. And then I was making millions of tiny things for my babies and the babies of my friends and family. And then the babies came. And I was exhausted.
But I'm staying home from school this year to be with the kiddos. And some days, I get tired of talking to myself. So I'm going to talk to whomever is still out there. And some days it will be about knitting. And some days it will be about sewing. And some days it will be about my kids. And who knows what else.
Is there anybody out there?