state of the knits

More updates on WIPs today, as I have dead camera batteries, so I can't show you any new stuff!

In that recent bout of starteritis, I started a "My So-Called Scarf" out of Brook Farms Four Play. I ripped out the previous incarnation as it was too tightly knit. Now, on a size 11 needle (like the pattern calls for!) it is much better.

The beginnings of the Snowy Triangle Scarf from Handknit Holidays, which is just a multidirectional scarf. This is in Paton's Soy Wool Stripes, which I enjoy working with.

Sophie is much further than the picture shows - about four rows and some i-cord from being done.

The Rutabaga bag hasn't seen much progress, as I don't like working with the hemp yarn for too long.

I started the Jumbo Elephant from Zoe Mellor's Knitted Toys the same night I started the snake. I haven't worked on it since, but I really want a new toy for me!

There are a few more knits lurking in the wings, but they need to have their picture taken before their blog preview. More tomorrow! 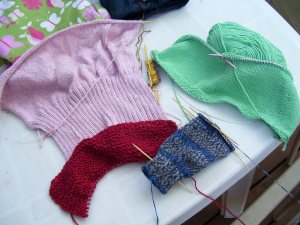 Really, it's like a disease. I finish one thing, and I feel the need to start 10 more. (Ok - in my defense, I did finish several things recently. But still.)

So what have I started recently? Let's take a look around.


The pink thing (long ago this was the new project that was not a sweater?). Yeah. It's a sweater. When it grows up it will be Vanessa (scroll down) from the RYC Classic Art pattern book. I'm nearly at the armholes and really enjoying this knit. Of course, that didn't stop me from starting another! The green thing will be a simple tank from an old issue of Knit.1, with some lovely Cotton Ease.

The blue sock is knit from Jawoll, and the teeny brown and yellow blob is the beginnings of the Yarrow Ribbed sock from Knitting Vintage Socks in Austermann Step.

The red blob is the beginnings of the Rutabaga Bag from the spring Knitscene, knit out of the hemp that my last Sockapaloooza pal sent me.

There is also a bottle cozy around here somewhere that didn't make it into the photoshoot.

I'm trying to keep myself from casting on anything else right now. We'll see how long I last!

State of the Knits

I did do some knitting on spring break, but I was also consumed by a day full of watchin' the neph, and, as we all know, three year-olds are not usually entertained by pointy sticks, unless they're doing the pointing. The Pirate Hat is done, but in need of a serious blocking. Hopefully tonight. 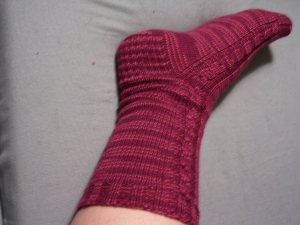 I finished one of my "sweet socks" - the needles are now free for round 2 of the madness, which starts Thursday. 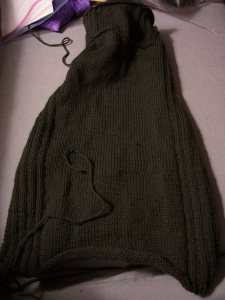 I am almost done with the back of hubbo's sweater. Why are men so big? And mine's not even *that* big. 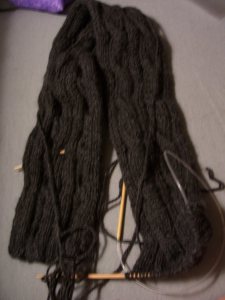 I knit up the second skein of the grey alpaca scarf. One more to go! 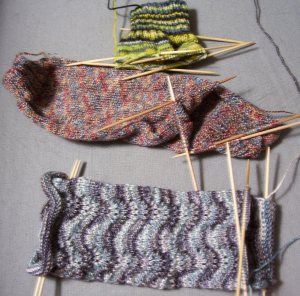 And some other socks saw some action - I started hubbo's second Trekking sock, I'm ready for the gusset on the Regia Bamboo sock, and I'm in the heel flap of the Feather and Fan sock.

I'm feeling pretty good about knitting up things I've already started, especially the socks. I have so many pairs close to being finished (four with one sock done, one half way done), that I'd like to have some new pairs!

However, I am feeling the urge for the spring/summer knits. I'll hold out until the end of round 2 of the madness, but I'm not going to be responsible for much past that. Maybe I can hold out until April. Maybe.