Home from the yarn crawl/shop hop, and moderately caught up with school work, so here's a quick look at my goodies from the weekend. 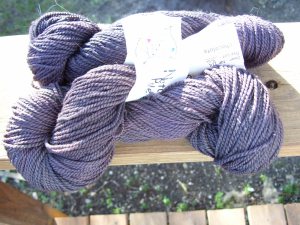 We left from Hill Country Weavers, where I managed to only purchase two skeins of Nature's Palette in a chocolately brown. Such restraint! 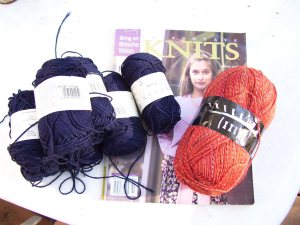 Our first stop was Yarn Barn in San Antonio. A large combo shop of needlepoint and yarn, we nearly destroyed the book and sale areas (there were about 35 of us). I managed to score an Interweave I don't have in the sale bin, along with seven skeins of Rowan Denim for the Indigo Ripples Skirt. And well, that Trekking couldn't be helped. It's orange after all. 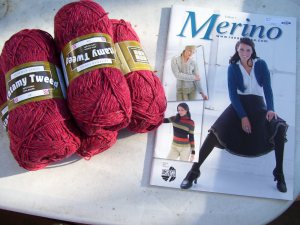 From there we headed to Yarnivore in San Antonio. This is a small shop in a strip mall area, but it is clean, well-lit, and the owner was very sweet. I did manage to find more yarn here I needed (shocking, isn't it?) Some Kraemer Tweed (cotton acrylic blend) that is more pink than the picture shows, and a pretty pattern book. 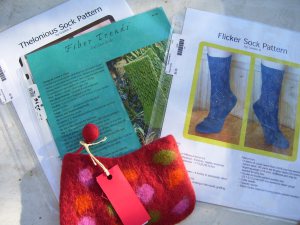 On to Boerne, where our first stop was Rosewood Yarns. A new shop that is crammed with yarn, and we completely took over. I did restrain myself from yarn here, but I managed to find three patterns and a beautiful needle-felted notions case made by a women's cooperative in Nepal. 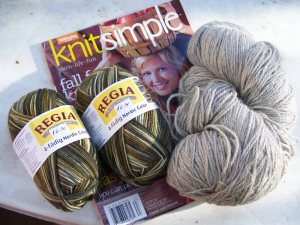 A short jaunt down the street, and we were at Ewe and Eye. A charming shop, filled up with toys, needlepoint, baby items, and yarn. The owners were lovely to us, and I came away with another back issue magazine I don't have, sock yarn for the hubbo (to make up for being gone all weekend, and spending money!) and a 660 yard hank of the softest alpaca I've ever felt. It comes from Switzerland, and has no tag, so I can't tell you about it, other than to tell you to call the shop and get you some. YUM. I'm envisioning a wrap to wear in my classroom. Hubbo wants me to make him a pillow out of it. Ha.

And that's it! We didn't get to Bluebonnet Yarns in Cedar Park, or Stonehill Spinning in Fredericksburg, due to the tight bus schedule. Ah well, just another excuse to do it all again next year!

A tardy birthday gift arrived today, but it was worth the wait. The Vogue Knitting "Ultimate Sock Book." Candy for the eyes.

The book is divided into four sections. The first offers a small history of knitted socks, with pictures and information about the history particular to England and North America. Chapters two, three and four are full of technical information and directions for knitting the different parts of socks. Both toe-up and top-down socks are represented. Also included are diagrams of the different parts of the socks. There are also charts for the number of stitches to cast on for each size a la the Knitter's Handy Book of Patterns.

The next section is about designing socks, and reads much like Sensational Knitted socks, without the organizing factor of having the stitch patterns with the same number of stitches grouped together. However, many of the stitch patterns are lovely, and I think they would look quite nice in socks. Following this is an almost-afterthought section on sock knitting around the world.

The remainder (about half) of the book is patterns. There are 25, and a good variety of colorwork, cables and lace. Unfortunately, all of the lovely patterns that appeared in Vogue last fall are included here, which is great if you didn't buy the issue, but a little disappointing if you did. I also think, and I could totally be wrong, that one or two of the patterns appeared in the earlier Vogue sock books. That said, there are about four patterns in here that I have my eye on.

Ultimately, if I had to choose between this book and Interweave's Favorite Socks that came out earlier this year, I'd go with Interweave. More beautiful patterns, even if you had purchased the magazines they were in, I think it's worth it to have them all in one book. And I find the Interweave patterns more appealing, perhaps because of their classic-ness and sensibility. I'm just not one for crazy colorwork socks. Won't wear 'em. And I won't wear short socks, which there are two patterns for in the Vogue book. However, this makes a lovely addition to my library, and I'm looking forward to having time to sit down and read it, especially the history section.

Oh, and if you want it - hubbo ordered it from bn.com, who said it was in stock (it still took a few days longer than normal), as opposed to Amazon which still has it as a pre-order.

Okey dokey! I've heard the cries, so you get it - a review of Knitted Toys by Zoe Mellor. (BTW - that link takes you to the Knitpicks page where you can see more of the projects.) 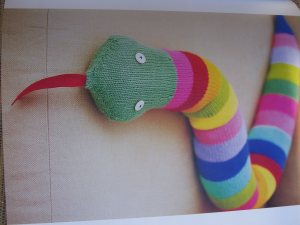 First of all, let me say that I love Zoe Mellor's books - I have several, though I have yet to actually make anything. But darn if she doesn't have some of the cutest kid patterns around! and I love that she uses bright, bold colors - none of this pink and light blue nonsense. 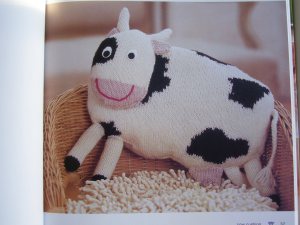 This book has 25 projects - from dolls to finger puppets and lots of lovies. One thing I enjoy about it, just from browsing, is the size of the objects - these are no tensie stuffed animals - the monkey is nearly as big as the child holding it! (You can see one here finished.) 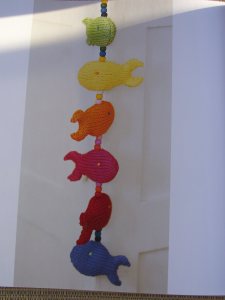 One thing I like is the variety of "extras" about these toys - the cat is a pj case, the cow is a pillow, the fish are mostly for decoration (and I think I need them in my classroom), the snake can double as a draft thingy (what do you call those things?), etc. I also like the variety in terms of finishing - there is a felted gingerbread man, a butterfly that uses felt for the backing on it's wings and the elephant ears use the same technique (as do the dog ears). The dolls have removable clothes, and would be tons of fun for a little girl. I'm not a huge fan of the owl (I think Lucinda Guy's is cuter) and the mouse pattern looks a lot like the mouse pattern from Stitch 'n Bitch Nation (but bigger), but overall, this is well worth the price (especially if you get it from amazon or knitpicks where it is reduced!). 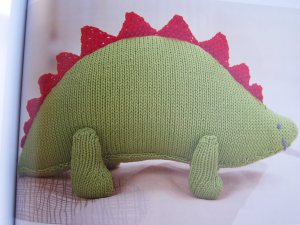 I myself am a huge sucker for the knit toys. I've got World of Knitted Toys, Knitted Toys, Toys to Knit, and a variety of other baby books that have toys in them. I'd love to have Family Circle Easy Toys, but I haven't added it to the collection yet. 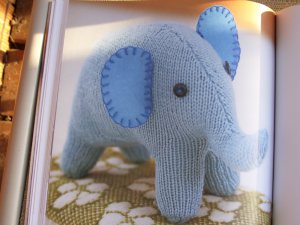 Sadly, with all of these toy books, I'm ashamed to say that I have yet to knit anything from them. I have made two dinos and an Oddfellow from Jess Hutch's book (which is wonderful, but sadly out of print), and I'd love to make more, but I just never get around to it. I am thinking that the nephew will get a new, bigger dinosaur this year for his birthday, and that some new and upcoming babies will get animals as they get older.

Perhaps we need a knit toy-along? Hmmmmmm, I just might have to do that. Anyone in?

The pictures are of my favorite toys from the book - and I don't know why the snake is sideways. I'm just glad blogger finally let me upload pictures. Arggggh!