A tardy birthday gift arrived today, but it was worth the wait. 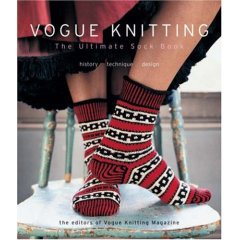 The Vogue Knitting "Ultimate Sock Book." Candy for the eyes.

The book is divided into four sections. The first offers a small history of knitted socks, with pictures and information about the history particular to England and North America. Chapters two, three and four are full of technical information and directions for knitting the different parts of socks. Both toe-up and top-down socks are represented. Also included are diagrams of the different parts of the socks. There are also charts for the number of stitches to cast on for each size a la the Knitter's Handy Book of Patterns.

The next section is about designing socks, and reads much like Sensational Knitted socks, without the organizing factor of having the stitch patterns with the same number of stitches grouped together. However, many of the stitch patterns are lovely, and I think they would look quite nice in socks. Following this is an almost-afterthought section on sock knitting around the world.

The remainder (about half) of the book is patterns. There are 25, and a good variety of colorwork, cables and lace. Unfortunately, all of the lovely patterns that appeared in Vogue last fall are included here, which is great if you didn't buy the issue, but a little disappointing if you did. I also think, and I could totally be wrong, that one or two of the patterns appeared in the earlier Vogue sock books. That said, there are about four patterns in here that I have my eye on.

Ultimately, if I had to choose between this book and Interweave's Favorite Socks that came out earlier this year, I'd go with Interweave. More beautiful patterns, even if you had purchased the magazines they were in, I think it's worth it to have them all in one book. And I find the Interweave patterns more appealing, perhaps because of their classic-ness and sensibility. I'm just not one for crazy colorwork socks. Won't wear 'em. And I won't wear short socks, which there are two patterns for in the Vogue book. However, this makes a lovely addition to my library, and I'm looking forward to having time to sit down and read it, especially the history section.

Oh, and if you want it - hubbo ordered it from bn.com, who said it was in stock (it still took a few days longer than normal), as opposed to Amazon which still has it as a pre-order. 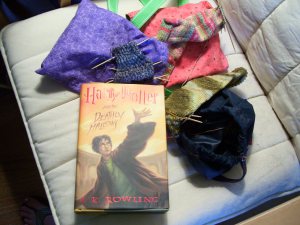 When the socks and I are finished.