I really have been knitting! Need proof? 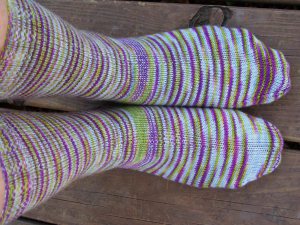 Pattern: My generic 72 st sock with heel flap and gusset.
Needles: Chiagoo sz 2.25 mm DPNs
Yarn: Scout's Swag in Zuluknitty.
Dates: Um, September 2007-February 1, 2008.
Mods: none
Thoughts: I love these socks. I love the colors. I love how they sort-of stripe. I LOVE the base yarn. I've worn them twice and it'd be more if I did more laundry. Love. Go get some yarn people. Run! Now I really want to knit up my other two skeins of Scouty-goodness. Yum. 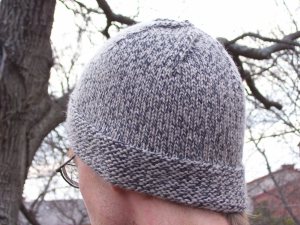 Pattern: Improvised hat - basic hat pattern with garter border.
Yarn: Mission Falls 1824 Superwash wool in the new tricolor.
Needles: Sz 7 or 8 Clover bamboo DPNs
Dates: January 2008-February 1, 2008.
Mods: Hubby really wanted an earflap hat, so that was the original intent. However, after I'd finished the hat part, and was going to go back and add the flaps, he decided he liked it the way it was. Voila!
Thoughts: Love this yarn too - so squishy!

Pattern: Fingerless gloves from Weekend Knitting - Ann Budd
Yarn: Knitpicks Wool of the Andes in Mist - about 1.5 skeins
Needles: Sz 7 or 8 Clover bamboo circulars
Dates: January 2008-February 1, 2008
Mods: None!
Thoughts: He seems to really like them and has worn them on the few cold days we've had. Pattern: 1x1 ribbed scarf, inspired by all the other ones in the world.
Yarn: Noro Silk Garden, and I can't remember the two colors.
Needles: Sz 8 Clover Bamboo
Dates: October 2007-February 25, 2008
Mods: None
Thoughts: Don't know why it took me so long to finish, but I love it. My only complaint was with one ball of Silk Garden that kept pulling apart, leaving me with way too many extra ends. Wore it today and got tons of compliments. It really is pretty.


OK! Now that I'm all caught up with FOs, I wanted to share some fun with you. My LYS is having a retreat this weekend. All knitting, all the time. I'm really hoping to come home with some more finished objects. But a little wager has arisen. Apparently there is a pool to see how many projects I will bring. Funny, right?

In keeping with all fairness, I think y'all should get a shot at a prize too. So, you are invited to take your own guess, and the winner will receive a little goodie from the stash. To keep it fair, let me tell you that I currently have 40 WIPs. I hope to finish up two of those before we leave, but no promises. However, there is always the possibility that I will start new projects (at least I can admit this, right?).

TO PLAY:
EMAIL your guess to knitnlit AT gmail DOT com, with the subject line CONTEST. I will not open those emails until I get home on Sunday night. The contest will close at 4 pm CDT Sunday afternoon. Please do not leave guesses in the comments - I will see those, and I don't want to be swayed! :) And, if you know me IRL, you are welcome to play along too.

I think this post is long enough, perhaps I'll be back tomorrow to show you some of the new projects I've started recently, but it'll more likely be next week. Until then, happy guessing!

Final FOs of the year? 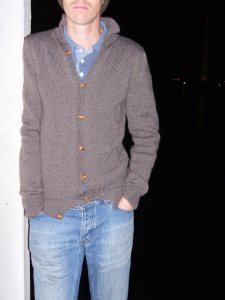 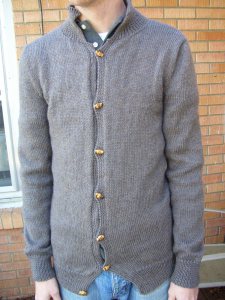 Pattern: Jarrett from Rowan Vintage Knits
Yarn: Ella Rae Classic, color 103, 6.5 skeins
Needles: Sz 5 and 7 Clover Bamboo circulars
Dates: mid September-Monday December 24.
Mods: Tons. I knit an XXXS size using Flintknits Pam'smods she was so gracious to share with me (thanks to the magic of Ravelry, I saw that she had knit a smaller size for her Jarrett, so emailed her and she shared her mods. Love Ravelry!). I also knit the sleeves smaller and not from the top down as she had done. Hubbo decided on a short collar (and he likes the standing-up of it), and no elbow or shoulder patches (for now).
Thoughts: he loves it. I love that it is done, and he can stop saying I've never knit him a sweater. He picked out the buttons, and it needs a good blocking so the button band will lie flat. He did say "Don't loose this pattern, 'cause I'm sure I'll wear this out in a few years and I'll need another." I think that's the mark of a successful knit!


I also knit up a quickie project for me. I started these a few weeks ago when it was starting to get chilly in the mornings, but put them aside to finish my holiday knitting. I threw them in my bag when we were leaving on Friday morning, and had them finished about an hour into our flight. And I enjoyed wearing them when it was chilly in the evenings in D.C. The color doesn't really go with any of my coats, but I don't really care! 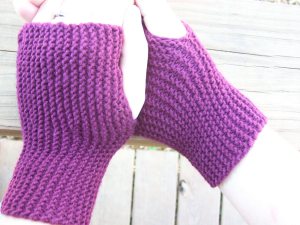 I have more to say about our trip, and my year in review, and my future knitting "goals", but that will have to wait, as I'm trying to finish up one more FO for the year! Fingers crossed!