Every year I give the kids new Christmas jammies. I used to give them closer to Christmas, but now I like to give them early so they can wear them for the season.

I picked up this adorable flannel at JoAnn's a few months ago when it was on sale and I had a coupon. It is hard to see, but they have moose wearing scarves and hats. I hadn't used flannel for their jammies in several years, and I will be going back to it - they are so soft! 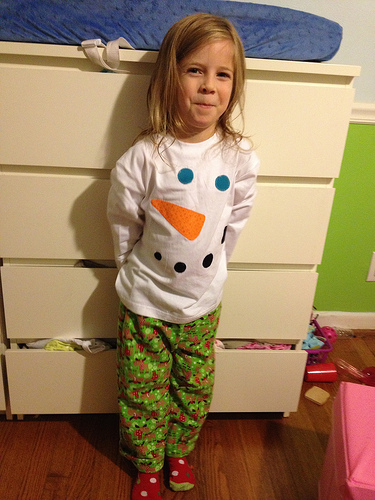 Their shirts were inspired by a Pinterest pin. I was a bit of a pain to cut out four sets of coal mouths, four sets of eyes and four noses (Henry has a pair too, but he was in bed when we took these pictures), and to applique them on, but they came out SO cute!

The kids were jumping up and down when they got them tonight - makes it all worth it!