I finally have good pictures to share with you of the kids Halloween costumes! There was a bit of waffling on their part, but about a month ago they decided that they wanted to be zoo animals. Thankfully, each wanted to be something different!

When they chose their animal, I started planning, I knew I didn't want to make huge, hot fleece costumes that would have to live in the dress up box afterwards. Then I remembered that Hobby Lobby had animal print fabrics. Sure enough, they had each animal the kids had chosen.

For the girls, I used the animal print on one side and a Lisette floral print on the reverse, and made Oliver and S Roller Skate Dresses. They looked adorable, and they can wear them again!

For Ben I made zebra pants using a pajama pattern (from McCalls) and the Easy Linen Pullover from Sewing for Boys. I modified it to have a roll neck instead of adding the collar. It came out great! 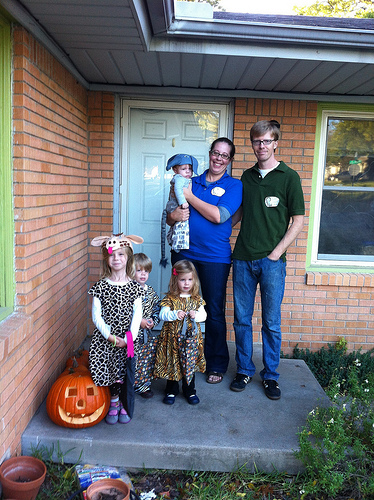 Henry was an elephant and wore Ben's old Ed Emberley elephant pants, a hat and tail. No one but Samantha would wear their hat or tail, and no one wanted to wear their mask (which was fine, since it was hard enough to see in the dark!) They will go in the dress up box!

Ben and Ellie really understood that they were getting candy this year, and everyone had a good time. Samantha is already planning their costumes for next year. So far the 3 little pigs and the Big Bad Wolf are in the lead!

I hope you all had a great holiday if you celebrate! Samantha is already on to the next - she wore her Turkey skirt to school today!