My nephew recently turned three, and moved into a big boy bed. I asked my sister if he needed a big boy quilt to go along with that bed and we got our wheels turning. Literally! He is big into race cars, and Lightning specifically. My sister found this quilt and another like it on Pinterest and asked if I could make something like that. Turns out they used a pattern from Denyse Schmidt Quilts, and I had the book! Hubby blew up the template pieces for me at work, and my sister ordered a bunch of fabric with race cars on it. We used a Michael Miller black and white pindot for the road, and a big rainbow dot print for the back. 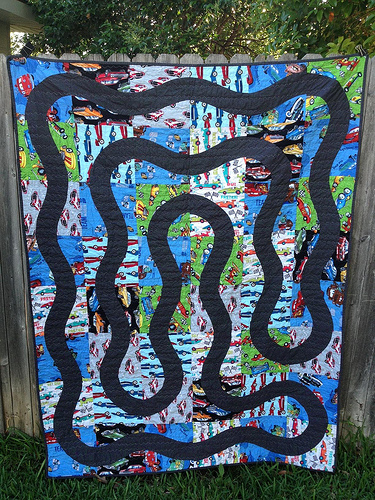 This was my first time making a template with curves. I found it difficult to cut them out without cutting the template. After too many nicks in the template, I finally decided to trace all the pieces and cut them out with scissors. It definitely took longer, but was less stressful in the long run.

It took much longer to pin all the curves together than it did to sew them together, but all the pinning was worth it! They came out great and laid flat with no clipping and very very few puckers (that were entirely my fault).

When I trimmed the blocks down I did find that some parts of my road no longer matched up - the large corner curves didn't always match the 'straight' curves. I couldn't finagle them to fit either - the blocks are so large that moving one enough to make the road match meant that it didn't match up to the next side. 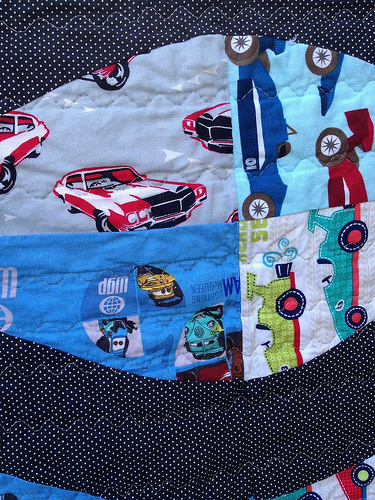 With hubby's help, we figured out how to lay out the blocks so that it was one continuous road. I had to make two more corner pieces for it to work, but that was no big deal! I quilted it with a wavy stitch to mimic the curves of the road. 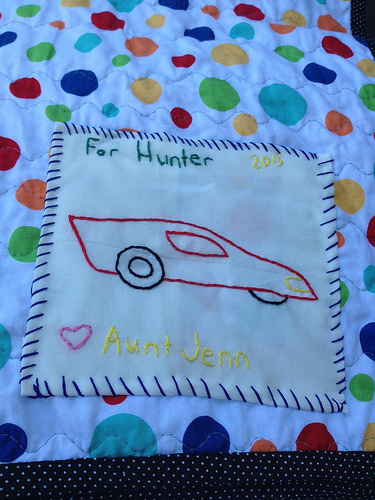 I made a label using a Sublime Stitching transfer and put his and my names on it, with the year. I hope he loves it, and that my sister doesn't blame me when he is up past his bedtime driving cars on his bed! :)