I am behind on posting my knitting projects again. I have finished up several things lately, and I just haven't blogged them (as usual!).

I have been knitting for MadTosh again. I finished up a sample of the Leftie shawl for the class I taught in August and September. It was a fun knit - relatively simple, though a bit tedious at the end! I used one skein of Madelinetosh Tosh Merino Light in Antler, and chose several of the mini-skeins they are selling to use for the colors. The kids and I had been attending a series of storytimes this summer where they talked about a different color of the rainbow each week, and read stories that corresponded to that color. I obviously had that on the brain when I chose my colors! I only used a bit of each color - I would have had enough to use them again in another shawl. 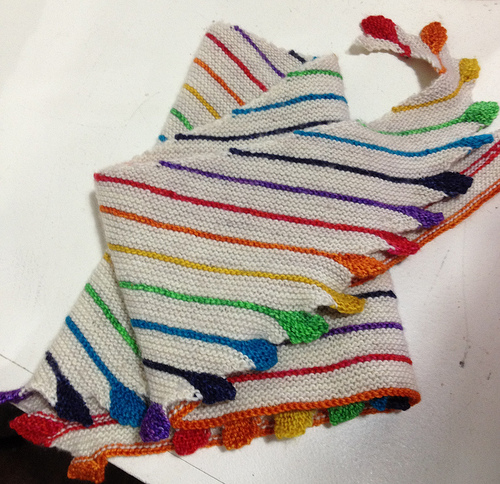 To use up all of my main color I knit through the recommended number of repeats, and then started weighing by ball of yarn after each repeat. Since the rows get longer every row, I was able to estimate how much farther I could go based on how much each repeat used up of the main color.

I also taught a sock knitting class, and knit up my sample in the new Madelinetosh Tosh Sock colorway exclusive to the shop - Go Frogs! We had a lot of discussions about how you 'know' when to use size one needles or size two needles, and how gauge can affect your size and the pooling of the yarn. So I knit one sock on size one needles over 72 stitches and one on size two needles over 64 stitches. You can feel a difference in the sock, and I'm sure there would be a difference in how they wear. I like to knit my socks as tightly as possible to ensure they last longer, but I thought the sock knit more loosely was softer. 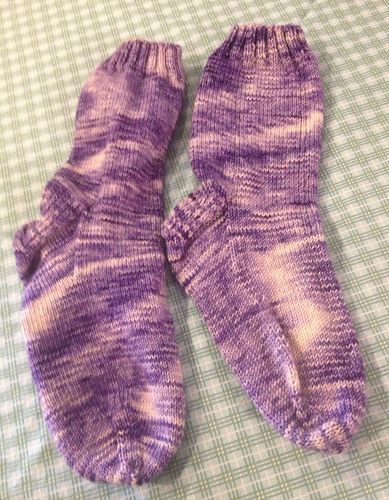 Finally, I was asked to knit a sample of the Tea Leaves sweater for a shop sample. I used Madelinetosh Tosh DK in Composition Book Grey. I knit the 32" size and used just over 4 skeins. Such a pretty and useful knit. I may have to make one of these for myself someday! 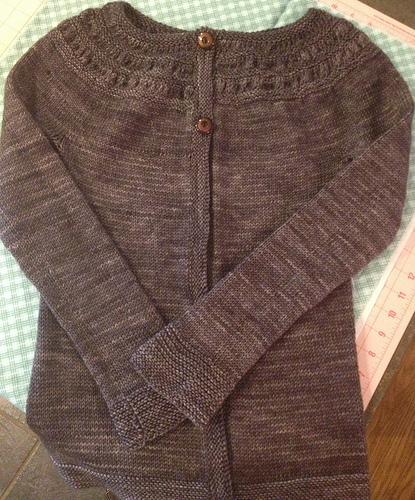