I'm a little late finishing up my 2008 FO posts, but I had to wait for hubby's sweater to finish drying to take his pictures. Anyway, here are my last 4 FOs for the year. 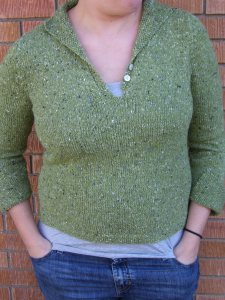 Pattern: Salina by Kim Hargraves, from Rowan Vintage Knits
Yarn: Rowan Felted Tweed - 7 balls
Needles: 5 US
Dates: Feb 2007-December 2008
Mods: My gauge was off, so I knit the largest size to get a 36"
Thoughts: Needs to be blocked. Could be a smidge longer. The yarn was crap to seam with. Didn't really take a year and a half to knit - back was finished in Jan or Feb of '08, other pieces knit this summer, waited until Dec (post xmas knitting) to seam. I think after blocking it will be the sweater I wear the most, after my Central Park Hoodie. Will be knitting it again, as my sister wants one too! 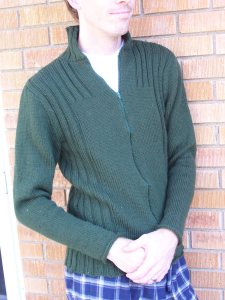 Pattern: Cambridge Jacket by Ann Budd, from Interweave Knits
Yarn: Knitpicks Wool of the Andes in Evergreen - 10 balls
Needles: US 7 Clover bamboo
Dates: um, 2006 sometime? to December 2008. Sat unworked on for most of that time.
Mods: Knit a tighter gauge to get a smaller size for skinny minny hubby. Didn't do the crocheted edging.
Thoughts: Fits him really well after blocking - an amazing difference. He asked for no edging, and it's not flipping up too much. Zipper is put in much better than the zipper I used for my Ribby Cardi (which I need to redo). 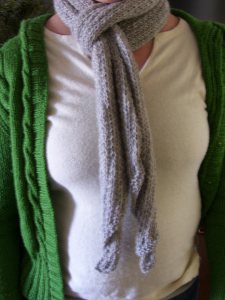 Pattern: Superlong Wrap by Kris Percival from Knitting to go box
Yarn: Baby Alpaca (no brand)
Needles: 10.5 US Clover bamboo
Dates: Sept 2008-Dec 2008
Mods: smaller gauge to make scarf instead of wrap.
Thoughts: can't decide if I should block it or not - I kind of like the curling quality of it unblocked.

Pattern: Korknisse
Yarn: scraps
Needle: US 6 or 7
Dates: Dec 2007-Dec 2008
Mods: none
Thoughts: knit all of the pieces last December. Got forgotten in a purse pocket. Found and bells attached for the girls' xmas ornaments this year. Will make more - they are so cute!
There were also 2 pairs of longies and a soaker knit for The Bug, but they are not super exciting blog fodder - they are in my flickr and ravelry, if you really want to see them.
Now that my 2008 slate is clear, I can tell you about my 2009 plans. Tomorrow.

Posted by Jenn at 04:43 PM in fo, gift knitting, scarf me up, sweaters | Permalink

There's nothing like a year-end summary to make you realize how very much you've accomplished. It all looks marvelous - congratulations!

That all looks great! I especially love Salina.

Wowza, your hubby looks HILARIOUS, nice pose and nice PJ pants.... :) Yes, I will have my sweater longer as well (please and thank you!)

I love your hubby's sweater! Might have to knit one of those for myself...