OK, I suppose only one of these is really a retrospective, since I finished the other two this week, but at any rate, there is proof that I've been finishing things - and best of all, these were all gifts!

Pattern: Shrug This from One Skein Wonders
Yarn: Elann Highland Wool Chunky - about 3 skeins
Needles: Sz US 10 Clover Bamboo Circular
Dates: February 2008-March 1, 2008
Mods: Did more increases than the pattern called for, thus adding width and length. From Ravelry I learned that it ran quite a bit small, so I measured as I went and tried to make it fit my SIL's approximate measurements.
Thoughts: Quick, easy, but frustrating that the pattern really doesn't turn out a wearable size unless you modify it. I hope it fit my SIL - it was her birthday gift, but I haven't heard yet if it was a success. 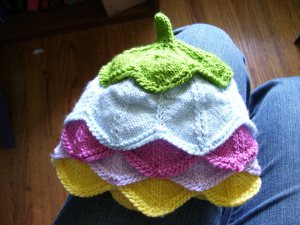 Pattern: Flore from Knitwhits
Yarn: Berroco Comfort DK in green, lt. blue, lt. purple, pink and yellow - tiny bits of each
Needles: Sz 6 Addi Turbos and Sz 6 Boye 16" Circulars (clover bamboo DPNs for the top)
Dates: March 2008-April 6, 2008
Mods: none, other than changing the colors from the pattern suggestions
Thoughts: I was really nervous that this would be so fiddly that I wouldn't want to work on it. However, it went fairly quickly, and even the tacking down of each individual petal didn't take too long. It is super cute, and I would make it again.

I have been working on some other projects and maybe starting some new ones. More on them later this week (I hope). Oh, and the tree? Still hanging on the power line. C'mon power company!

Some nice little knits! Hope you got the tree removed. Take care:)

That hat is adorable! Argh - so the shrug was classified as "one skein" because it was miniscule?! That's cheating.

"maybe" starting some new projects ... hmmm. i love how you play fast and loose with the word maybe. :)

Cute FOs! That flower hat is the cutest thing I've seen all day.

The flower hat is absolutely adorable. I hope finishing some projects has helped with the stress of those trees on the power lines.

That flower hat is about the cutest thing I've ever seen. The colors are perfect for spring.Sad about the tree:(