What I knit on my spring vacation

Now onto the thing y'all care about most (well, after stash enhancement really!) - the knitting!

I knit a bunch on my "Meredith's Little Lace Socks" on the flight out to Hartford. And when I was almost at the heel I tried them on. They fit fine, but y'all who say varigated doesn't work with lace - well, some day I'll listen. (But why do I love my Leaf Lace Shawl which is varigated too?). Sock on needles (see, pretty! You can see the pattern! 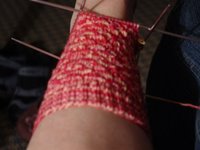 Sock on foot (blech. What is that mess?)

So I ripped it back to the cuff (because after the gusset, the cuff is my least favorite part), and brainstormed what to do now. I had no pattern books with me. I had some pattern possibilities, but all were really "for" my sockpal socks. I decided to do a 3x1 rib on the 60 stitches I had already in the cuff (sz 2 needles for the curious). I LOVE this sock! It is so soft, and I love the stretchiness of the rib and the way the colors "stripe" up. I even like the big pink pool across the gusset. Love them. 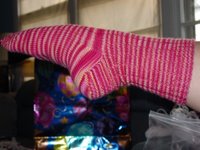 Of course, because I love them, they're going away. Being discontinued by Knitpicks. Boo Hoo. And, because it's Murphy's Law, I've had this marinating in the stash for almost a year. Figures. It was too pretty to use! (Of course, I'm not sure why it didn't occur to me that it would be pretty on my feet too!) I do this all the time - buy something I love (now it's mostly yarn and bath stuff/candles) and never use them, as I don't want to "waste" them. I've learned my lesson - waste away! 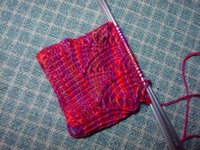 I also thought long and hard about my sockpal socks, and decided (as I sat in the Hartford airport for 3 hours) that I would try Pomatomus. It is slow going so far (probably because I got very sleepy on the plane), but I'm really enjoying the combination of yarn and pattern. And it's pretty easy to remember where to decrease and yo, so not too much pattern reading which is nice. It'll make a good TV project. Must knit faster. 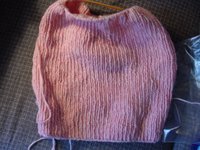 I also finished up the body of Chrysallis tonight - I was almost done on the trip but I couldn't face any more 1x1 ribbing. I'm hoping to cast on for a sleeve soon so I can get this done! I'm still loving the way the yarn knits up - so nice!

And, because I was going to see my sister, I decided to take along the pattern and yarn she picked out for her wedding shawl so I could swatch it up to see if it met with her approval before I knit the whole thing. So far, so good, though this will now be on hold for a month or so while I work on other things. Hey, I have until September! (The pattern is the Baltic Sea Stole from Fiber Trends and the yarn is Knitpicks Merino Style, I think the colorway is winter night - something like that.)

I started my second ribby sleeve before the trip and I worked on it a bit more tonight at knitting - it is my priority knitting this week as I'd like to have ribby blocked and start seaming by the weekend - still have to resolve that zipper issue though. JoAnn's has some new stock in, and they have one that may be close - I'll take my yarn up tomorrow to match it up - wish me luck!

Tomorrow - what I did on my spring vacation when I wasn't knitting!

Posted by Jenn at 03:45 AM in Uncategorized | Permalink

All your projects are coming along so nicely. I love the socks - I didn't know Knit Picks was discontinuing that yarn? The whole Sock Garden line or just that color? Waaaaa. I do the same thing that you do - when I get something nice I don't want to used it. Bath & Body works stuff and Yankee Candles will stay forever because I don't want to use them. I guess it is silly, huh?

I'm a varigated + lace sinner too. So of course I think your socks look great! You have a color theme going on with all of your knitting.

Your ribbed socks look fantastic!! I'm guilty of the exact same thing... I "save" all my nice stuff and all it does is collect dust. The DH never understands my mentality, so I'm glad to know I'm not the only one! ;-) I'm going to follow you, though, and start using the stuff I've been loving and "saving." You're so right- life's too short- we deserve to "waste" nice stuff!! Pomatomus is looking GORGEOUS.. I love the way that colorway is working up with the pattern. Keeping my fingers crossed for you about the zipper.. take care, Jenn! :-)

I've been meaning to buy sock yarn from knitpicks too. Maybe if enough people complain, they'll change their mind.

OMG I had no idea you had flown into Hartford! If I had known, I could have driven up there to keep you company--it's only about a half an hour from my house. Love your Pomatomus!

Pomatomus is so gorgeous. I need some. I need some more sock yarn. You are a bad influence.

I bought a bunch of the discontinued colors, they should be getting here any day now. It looks like they are combining their 100% wool lines into one line just called Memories, and have discontinued a bunch of colors, but have added a couple new ones also.