Lots to share, so get comfy. I'll wait while you get a beverage and/or snack.

Some FOs for you: 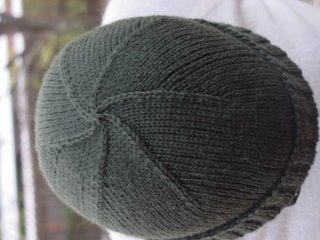 Second verse, same as the first.

I also finally got up the guts to face the curse of the black hat. I just finished it up. 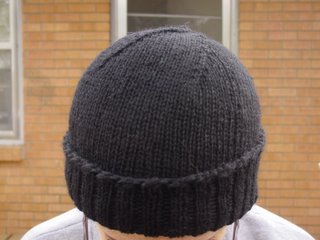 Same specs as all the others - I finally have the pattern memorized! This one is a tad longer than the others due to my inability to remember to stop and measure. It also seems a bit looser, but I wonder if that is due to the reuse of the yarn. Anyone else have this experience? But it's done! Yippee!

I've also worked on the Irish Hiking Scarf. This picture is a few days old - it is at 1 1/2 skeins, and I'm now just into the 3rd skein. I've finally learned to "read" the pattern, so I don't have to keep track of the rows! Woo Hoo! 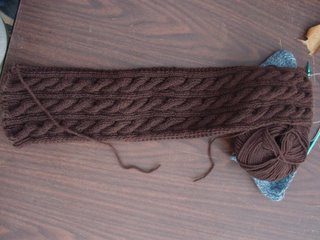 On Sunday, I visited JoAnn's for some Harry Potter Wool-Ease. I wanted to make a scarf for the movie, so I picked up some gold and "close" to burgundy. This knits up very quickly, but I have been neglecting it. I knew I couldn't get my HiP scarf finished in time. 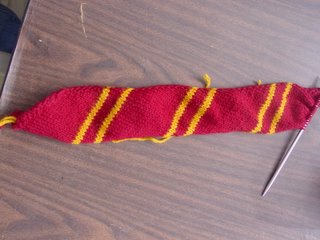 I had grand plans to work on this during the wait to be seated for the movie, but we know what happens to plans. I'll tell you my story...

Thursday night I came home and after The Girl left, I took a nap to prepare to stay up WAY past my bedtime. I got up about 10 pm, and when The Man got home from work we left for the theater. We arrived about 10:40, and the line was out the door. Mind you, we went to a theater in a mall. There was plenty of space for us to line up inside, but they choose not to do that. Of course, I didn't have my coat (and it was about 40 degrees outside). It was too cold to knit outside since I had to have my hands in my armpits to keep warm!

About 11:30 they started seating people. However, they did not tell us how they were seating people, and after waiting in line for nearly an hour, we were told that it was not our time to be seated. So we stepped to the side while they seated EVERYONE ELSE IN LINE. Finally the ass monkey in charge disparaged to seat us, and directed us to a theater that had NO seats left. When we went to tell him (us and the other 20 something people with no seats), he didn't believe us. He finally drug his ass to the theater and asked everyone to scoot in. Of course, they were already seated with no empty seats in between.

After waiting for another 10 minutes or so, The Man came back (he had followed ass monkey to see what he was going to do) and directed the rest of us to another theater that had MANY empty seats. Ass monkey never showed back up. A letter is being written to the management of the theater, 'cause I'm pissed.

But the movie was great! I was disappointed at all that was left out, and The Man and I have some questions about how they're going to work that stuff in, 'cause some of it affects book five (and hence, movie five), but I don't want to spoil the film for anyone. The end had me in tears, and I can see how Mike Newell saw that this story is really a turning point in the series. The film is darker, yet he put a lot of humor in it. And it was scary. The Girl won't be going to see it anytime soon.

However, we are getting too old for this nonsense. As soon as The Girl left with her mom Friday night we went to bed. At 6 pm. I woke up at 11:30 and let the dogs out, and went back to bed. Slept until 7 am Saturday. Yikes. That's a lot of sleep.

Enough babble. I've got lots more to share, but I'll save some for later.

I'm out of school all week this week, so expect to hear lots from me!

Posted by Jenn at 04:32 PM in Uncategorized | Permalink

Your hats and Irish Hiking scarf look fantastic! You're really churning them out! ;-) The HP scarf looks great, too. Glad to hear the movie was worthwhile in spite of the monkey! :-)